On July 21st, E1 Entertainment will release Dakota Skye, a winner of six 2008 festival prizes, on DVD. To celebrate the release, FilmFetish is giving away five copies of the thought-provoking coming-of-age story, to readers.

PLEASE NOTE: To be considered to win this and all future contests, your eNews profile must be updated with your current mailing address. CLICK HERE for further details and instructions on how update your existing profile, if necessary. Only eNews subscribers are eligible for contest prizes.

I’ll be running this contest through July 21st. 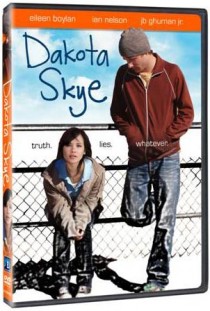 Imagine having the ability to recognize a lie – any lie – as it is being told. The idea sounds appealing, until fully thought through. Dakota Skye explores this concept through a gifted 17 year-old girl, who, unable to trust the people she loves, grows disillusioned with life. Newcomer Eileen Boylan (Sleepover, “South of Nowhere”) charmed audiences with her fresh performance as Dakota Skye as the film earned six awards during its 2008 film festival run. This summer, Dakota Skye debuts on DVD loaded with special features including an audio commentary, making-of documentary, outtakes and bloopers, and more. Dakota Skye arrives in-stores July 21st from E1 Entertainment.

“In this era of unorthodox superheroes on both screens large (Hancock) and small (TV’s “Heroes”), Dakota Skye manages to fly high.”
– Creative Loafing

For as long as she could remember, Dakota Skye (Boylan) has been cursed with a super power; she has the ability to see the truth in any lie she hears. From small, harmless white lies, to the more devious kind, they have come from the people that she should trust the most; her family, friends and teachers. Now 17, cynical and aloof, she finds little joy in life, until her boyfriend’s best friend Jonah (Ian Nelson) comes to town. Unlike everyone else, Jonah doesn’t lie. But is he really that squeaky-clean, or is he Dakota’s arch-nemesis, a villain who has found a way to conceal his deceit from her?