Echelon Conspiracy’s premise is a rather interesting one, surrounding a cell phone that bestows upon its owner, sets of instructions for getting the most money possible in virtually any situation. Unfortunately, that’s about where the interest ends. After computer expert Max Peterson (Shane West) mysteriously receives a parcel containing the mystical phone, the plot takes a ride through very familiar territory, careening between the overdone eroding personal liberties and dangers of technology scenarios, with the usual added good and bad government agents trying to either snuff the main character, or rescue him from the bad guys. 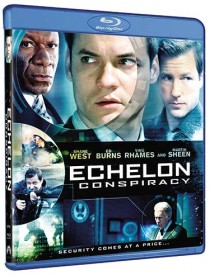 After deciding not to return the package with the shiny new cell phone, Peterson is instructed to get to Prague where he’s given all the proper instructions to win millions of dollars on the slots and table games of a highend casino, much to the chagrin of the establishment’s chief of security, John Reed (Ed Burns), who investigates Peterson’s improbable lucky streak. While trying to apprehend him after Peterson decides to dart, Reed is thwarted by FBI agent David Grant (Ving Rhames) who’s also been tracking Peterson’s movements. Reed and Agent Grant share history as the former previously worked for the bureau before taking the security position at the casino.

After a series of improbable and inadequate action segues and plot twists, it’s revealed that a super-computer engineered by the NSA code named ‘Echelon’ has been relaying the prizewinning messages to the phone. Enter more plot rehashes and a few decent edgy moments, and a major conspiracy is revealed that must be stopped… or else!

The production had at its disposal, several respectable actors, but for some reason, didn’t make use of those talents, instead opting for cardboard dialogue and manufactured thrills that have mostly been done before, and in much better fashion. The only thing I could think of, was that the film was intended for television, but things didn’t work out, so they chose to go the DVD/BD release route.

Technically speaking, the Blu-ray’s audio and video on the Blu-ray presentation is very well-done, if that matters at all (It doesn’t). The Blu-ray is presented in 1080p high definition with English 5.1 Dolby TrueHD and English, French, Spanish and English SDH subtitles.

There are no extras or bonus material on the disc.