Seth MacFarlane – creator of the cult hit animated show Family Guy – has taken some of his original animated vignettes that first appeared online at MacFarlane’s Youtube channel that shares the show’s name and SethComedy.com – runs them completely unedited and uncensored – and has added some previously unseen footage, and created the almost feature-length Seth MacFarlane’s Cavalcade of Cartoon Comedy. The entertaining set of skits, stand-up, odd situations and random setups, runs just under an hour. 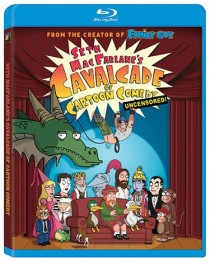 The segments play one after the other, without any connecting narrative, in both unique and recurring sequences, that are filled with pop culture references throughout, and overall make for some hilarious moments. Some of the recurring segments do get stale, like the overdone “Sex with…” bits. The content is definitely strong, and the disc comes with an Uncensored tag for good reason, with bits targeting AIDS, bestiality, suicide, and piles of shit that are sometimes placed simply for good measure.

Many of the episodes were too raunchy for television or the net, and the disc contains a total of 50 short vignettes which highlight all-new characters, Family Guy voice talent, along with parodies of Jesus Christ, Bob Dylan, Ted Nugent, Quentin Tarantino, Super Mario, Jeff Goldbum and many more. Hardcore MacFarlane fans are sure to devour the series, which takes Family Guy and American Dad to the next, inappropriate, level. But be prepared for sequences like Fred Flintstone taking a dump, and Optimus Prime having sex, as nothing is off limits in Seth MacFarlane’s Cavalcade of Cartoon Comedy.

Bonus Features
Seth MacFarlane’s Cavalcade of Cartoon Comedy carries over quite well to the Blu-ray format, featuring a widescreen presentation format, with 5.1 DTS audio along with English, French and Spanish subtitles. However, there’s not much at all, in the way of bonus material. There’s a four minute featurette of the Red Carpet Premiere, featuring the cast and crew and others, praising the project. MacFarlane also discusses his inspiration for the ‘Cavalcade of Cartoon Comedy’. There are also three sets of Still Cel Galleries, featuring rough character models, cleaned-up character models, and fully colored character models.