The classic disco street epic Saturday Night Fever captured the essence of 1970’s Brooklyn, New York, like no other film before or since, thanks in no small part to the grounded and uncompromising direction of John Badham, who has a knack for bringing a gritty realism to solid action and comedy films like Stakeout, WarGames, Bird on a Wire, and Blue Thunder. Badham crafted such an original New York story, filled with humor, tragedy and the hope of something better in life. 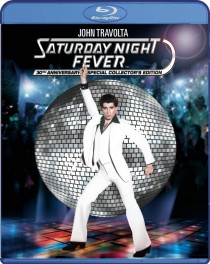 John Travolta was perfect as young Tony Manero, an average paint store clerk living with his parents, who hangs out with his old high school buddies. Like many people, Tony has dreams of a better future and hits the dance floor at the local disco to feel empowered and, at least for the moment, rise above the limitations his life has dealt him. When he expresses himself through his dancing, Tony is already a star.

The young hopeful soon finds himself drawn to Stephanie (Karen Gorney), who also dances at the club, and who’s looking to move out of the local neighborhood to pursue her dreams. As she presses for Tony to join her, he considers his family and his friends, and probably a bit of fear of the unknown takes over, before both an unsuccessful night on the dance floor, and a personal tragedy force him to realize that the only way he can possibly reach his dreams, is by having the courage to go after them.

Bonus Features
Watching Saturday Night Fever in the Blu-ray format was a great experience. John Badham’s penchant for deep, gritty tones, makes for a rich transfer, with colors dancing on the screen, highlighting areas of nuance, long-lost with previous inferior VHS and DVD transfers. Bonus features include a great new feature length commentary track from director John Badham, highlights from a Behind The Music program that originally aired on VH-1, and several deleted scenes from the movie, that were primarily helpful with character development. There are also a number of very enjoyable vignettes, including: A 30-Year Legacy, which discusses the film’s overall impact; Making Soundtrack History, which discusses how the groundbreaking soundtrack was released; Platforms & Polyester, a humorous featurette that focuses on the outfits of the era; Deejays & Discos, which includes interviews with authors Frank Broughton and Bill Brewster, among others, and looks at the club scene of the 1970’s, which acts as the film’s backdrop (That was a bit nostalgic for me, as I grew up at the tail-end of the original New York City club scene, and had the chance to frequent a few of the spots that were profiled, although not during their true heydays of debauchery); and finally Spotlight on Travolta, which looks at John Travolta’s career, and how he won the role of Tony Manero. Overall, a very nice set of extras, worthy of this anniversary release.