A MIghty Heart is based on Mariane Pearl’s account of the riveting and unforgettable story of her husband, Wall Street Journal reporter Daniel Pearl’s life and death. Director Michael Winterbottom crafts a film that captivates, intrigues, saddens and angers us, even though we know the outcome of events before watching. 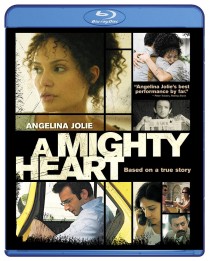 Daniel Pearl (Dan Futterman) is in Pakistan with his wife Mariane (Angelina Jolie), reporting on terrorist activity in the region. After being promised by one of his sources to a meeting with a prominent sheik named Sheikh Gilani, and never making it back to their residence, an investigation is launched into his disappearance. The journalist’s kidnappers insist he is an American CIA agent posing as a journalist. Tension-filled moments pass on screen, with his wife Mariane desperately attempting to get back the man she loves.

Jolie’s performance is no less than brilliant, playing a woman with resolute strength and focus – a woman who just wants her husband to live and see their unborn child. The mounting pressure builds until her emotions reach a crescendo in the film’s climactic scene. Knowing what happens will not prepare you for the gut-wrenching moment she learns the truth.

As the film progresses, A Mighty Heart snaps to organization and mobilization, as Daniel’s editor flies over from the U.S., and the embassy, FBI and Pakistani law-enforcement get involved in the case. Working with few clues, the massive resources chase down every clue, no matter how small. In the middle of the unwinding investigation is Mariane, trying to hold herself together. Jolie is refreshingly gentle and understated, delivering every line as a real person going through suffering would – with mental fatigue and pain.

Winterbottom takes the viewer through a maze of emotions, with leads and dead ends that Mariane Pearl and investigators face, as he approaches the subject in a matter-of-fact and deliberate style. The director gets to the core of the real tragedy of Pearl’s senseless death; a caring man who attempted to understand the motivations of terrorists and explain them to the world, through the journalism medium.

Bonus Features
The extras from the film’s initial DVD release are carried over to this Blu-ray edition. Included is a 30-minute documentary on the making of the film. There’s some interesting conversations with filmmakers and the cast here. There’s also short clips and images of the real Mariane and Daniel Pearl, giving viewers an intimate view of their life together.

There’s also a public service announcement from The Pearl Foundation with Christiane Amanpour and a short featurette on the Committee to Protect Journalists, an organization dedicated to keeping reporters stationed overseas safe.

The theatrical trailer – the only bonus feature presented in hi-def – rounds out the bonus material.