Futurama: Into The Wild Green Yonder is the fourth and final direct-to-video Futurama feature. The new animated film premiered on DVD and Blu-ray disc on February 24th, but I had the opportunity to watch a screening of the film at New York Comic-Con last month, and producers really saved the best for last. Into The Wild Green Yonder is hysterically funny, with moments of pure genius. I was a fan of Bender’s Game, but ‘Yonder’ just drove it home for me.

Joining the adventure this time around are illusionist Penn Jillette, hip-hop legend Snoop Dogg, talk radio host Phil Hendrie, and Family Guy creator Seth MacFarlane. In addition, fans of the series will finally discover the truth about Number 9 Man, the mysterious character from the earliest days of the series.

The crew are on Mars, where Amy’s father is blowing up Mars Vegas (rather quickly) and putting up a newer, larger New Mars Vegas city. A group of feminist/nazis are protesting the construction, so Mr. Wong blows them up as well, and in doing so, one of their necklaces lands in Fry’s skull, giving him the power to read minds. Luckily, a wacky homeless guy shares a tinfoil hat with Fry, so he can control his new-found power. Fry is then led to a ‘secret society’ of crazy guys, all wearing tinfoil hats. Fry is the only one who can defeat the Dark One, now that he can read minds, but cannot have his own mind read.

Even more shocking – Bender falls in love with a married fembot, and Leela’s on the run from the law – Zapp Brannigan’s law! Fry is the last hope of the universe (so if you’re in the universe, you might want to think about going somewhere else). Could this be the end of the Planet Express crew forever? Say it ain’t so, meatbag! Off we go, Into the Wild Green Yonder.

Special Features
It was fun comparing the Blu-ray quality to the con screening I watched. The disc offers a crisp, clean animation with vibrant colors, compared to the somewhat dark big screen version (although that was a con screening, not a traditional theater). Animation generally transfers to this format beautifully, and Futurama: Into The Wild Green Yonder, is no exception. 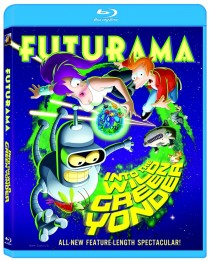 I was very impressed with the amount and depth of extras on the disc. Docudramarama: How We Make Futurama So Good is a hilarious spoof on run-of-the-mill behind-the-scenes documentaries. There is a video picture–in–picture commentary, along with Matt Groening and David X. Cohen In Space, featuring the two creative producers narrating a collection of photos and video clips from their Zero G flight experience. There are also commentaries from John DiMaggio, Maurice LaMarche, as well as Michael Rowe, Lee Supercinski, Patric M. Verrone and Peter Avanzino, who all worked on the project. The deleted scenes were very interesting and lots of fun to watch. They featured some finished work, as well as some raw animatics, and most were gut-busting. There are also two animated shorts on the disc, including Bender’s Movie Theatre Etiquette and Zapp Brannigan’s Guide to Making Love At A Woman. Both are composed of recycled footage from both the series and the first three features. The Acting Technique of Penn Jillette is a featurette with the magician, as he records from his Vintage Nudes studio. The How To Draw Futurama in 10 Very Difficult Steps piece was a fun exercise for this former art student, and extras are rounded out with an Animatic and a 3D Modeling Gallery.

Futurama: Into The Wild Green Yonder is presented in widescreen format with English Dolby Surround 5.1, along with English, French and Spanish subtitles.

One of my favorite details on the production side of the presentation, were a set of 4 heavyweight postcards, featuring cel art reproductions, wrapped in a full-color holder. Very well done and a nice addition to the piece.

The only issue I have with the movie, is that it’s the final chapter of the film series…for now.