On January 6th, CBS Home Entertainment and Paramount Home Entertainment released the sexy and scandalous historical series The Tudors: The Complete Second Season on DVD. The Tudors is such a guilty pleasure. It plays like a savage mixture of As the World Turns and Caligula, and always has me waiting for the next big dramatic moments to unfold.

The show presents the tumultuous early years of King Henry VIII’s nearly 40 year, omnipotent reign, from 1509-1547. In addition to his famous female consorts and 20+ year marriage to Catherine of Aragon to the infamous dalliance with Anne Boleyn, the series delves in to Henry’s most notable political relationship and the deconstruction of the Roman Catholic Church in England. 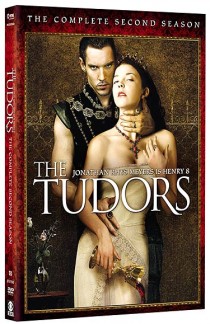 Jonathan Rhys Meyers (Match Point) returns to his role as Henry VIII, whose promiscuous ways change the course of history as he moves to divorce Queen Katherine (Maria Doyle Kennedy) and marry Anne Boleyn (Natalie Dormer), prompting Pope Paul III (8 time Oscar nominee Peter O’Toole) to have him excommunicated. Anne’s failure to provide Henry with a male heir sets the wheels in motion for her eventual beheading and sends him into the arms of Jane Seymour (Anita Briem).

The Tudors continues to garner record viewership for Showtime and picked up 2008 Golden Globe nominations for Best Television Series – Drama and Best Actor (Rhys Meyers). The show returns for a third season in the spring of 2009, with Grammy Award winner Joss Stone joining the cast as Henry’s fourth wife, Anne of Cleves.

The Tudors: The Complete Second Season is packaged on four DVDs featuring all 10 episodes, plus two featurettes.

Tower of London looks into Anne, the character Natalie Dormer played in the show. This was an enjoyable featurette, and adds to the overall presentation.

A photo gallery and text biographies of the actors are included as well.

There’s also a ton of new Showtime series episodes, including the season two premieres of Showtime’s Golden Globe nominated Californication and the Emmy nominated This American Life. You can also access and view the first two season three episodes from Dexter and the second episode from Californication’s second season.

Here is the disc breakdown for the DVD presentation: