Paramount Home Entertainment released the action thriller Eagle Eye on DVD and Blu-ray on December 28th 2008. In the film, Eagle Eye refers to an unseen “force”, that has acted as Big Brother for the government, watching U.S. citizens’ every move, including bank transactions, travel, cell phone calls, computer time, and more. Something happens that causes the “force” to go rogue, and that’s when the shit hits the fan.

The very timely topic is turned into a series of high-concept action set pieces, that provide lots of eye candy for viewers. Director D.J. Caruso’s sharp eye turns what might otherwise be a mash-up of random scenes, into a watchable film vehicle for Shia LaBeouf. I’m sure having Oscar-winner Steven Spielberg in the producer’s chair helped as well. 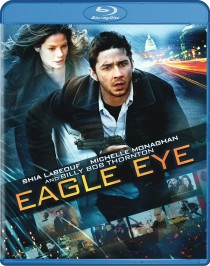 The race-against-time thriller begins as strangers Shia LaBeouf and Michelle Monaghan are ripped from their ordinary lives, after being “activated” as part of a high-tech assassination plot against members of the U.S. government. Through a series of blistering chases they attempt to escape an unseen enemy that seems to be everywhere.

Eagle Eye is presented in AVC 1080p, with heavy color filtering, turning scenes towards a muted blue tint, which actually works, given the subject matter and path the story takes. It makes the viewer almost have the point of view of the “enemy” that’s stalking LaBeouf and Monaghan’s every move. The transfer is very crisp, with a nice hint of film grain.

The action sequences benefit highly from the 5.1 Dolby True-HD audio, which make full use of the surround and sub-woofer channels. More sound balance would have helped, especially in dialogue-heavy scenes, but the mix delivers the impact and effect it should.

Deleted Scenes (4:39) include four previously unseen segments, the last of which opens up the possibility of a sequel.

Asymmetrical Warfare: The Making of Eagle Eye (25:32), is an interesting and surprisingly thorough featurette, presented in HD, that reveals how Steven Spielberg conceived the idea for Eagle Eye over 10 years ago. There is a good mix of behind-the-scenes footage and audio commentary, presenting how Eagle Eye was made.

Eagle Eye on Location: Washington, DC (5:58) – In this HD segment, the film crew travels to DC to shoot in the streets and inside the Library of Congress. The library’s director of communications also presents some interesting historical points about the building.

Is My Cell Phone Spying on Me? (9:14) – This is the “high tech gear” featurette, showcasing how the script mirrored what’s possible or will be possible in the near future, regarding the scary prospect of cell phone surveillance. This segment is presented in HD.

Shall We Play a Game? (9:22) – Director D.J. Caruso has a discussion with legendary action director John Badham, his mentor and the director of War Games. This is perfect for film buffs like me, who saw the many thematic similarities between Eagle Eye and War Games. The segment helps make sense of those, and establishes the relationship between the two films. This segment is presented in HD.

Road Trip: On Location With The Cast And Crew (3:05) focuses on the hectic on-location shooting schedule that the cast and crew had to endure, while traveling all over the country to film the many scenes for the movie.

A seven-minute Gag Reel, along with a Photo Gallery and the Theatrical Trailer, round out the extras.