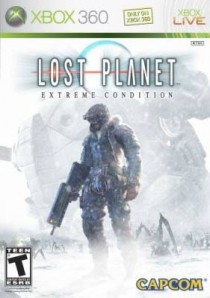 Variety reports that Warner Bros. and Japanese game publisher Capcom are teaming to bring the video game Lost Planet to the big screen. Warner’s will distribute the film based on the hit game and Capco will co-finance, and possibly develop a sequel to the original game.

David Hayter (The Scorpion King, X-Men, Watchmen) is writing the script for the film.

In the Lost Planet game, human snow pirates navigate VS (Vital Suits) through hostile ice-covered environments, fighting against the indigenous Akrid creatures for the precious thermal energy they need to survive. For one such pilot named Wayne, death almost seemed imminent until he was fortunately rescued. However, he can only remember a few fragments of his past including the slaying of his father by the monstrous beings. Yet under the veil of ice, a devious plan has been set into motion for the termination of all Akrid and snow pirates alike. What really happened to Wayne? Who is plotting the destructive scheme? Encounter valuable allies and dangerous enemies on Wayne’s search for the truth.

This isn’t Capcom’s first experience with big screen versions of its software. The publisher has had its Resident Evil game turned into three films, with a fourth in the works. It’s currently partnered with Hyde Park Entertainment on a live action version of Street Fighter and is developing a feature version of Onimusha at Paramount.

Those companies recently made a DreamWorks deal for a 3-D live action film based on the futuristic Japanese manga classic Ghost in the Shell.