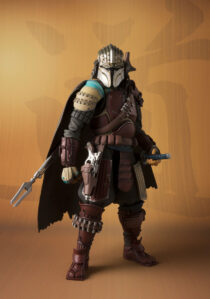 While Covid knocked out New York Comic-Con for 2020, Reed Pop has kicked off a series of virtual experiences featuring panels and vendor spotlights. Premium Bandai USA has reached out to us with their offerings this year, including highly sought-after and exclusive collectibles from Tamashii Nations. Dragon Ball S.H. Figuarts and the Star Wars Meisho Movie Realization line continues with all new figures available for pre-order exclusively at Premium Bandai’s website.

Tamashii Nations has launched S.H.Figuarts RADITZ. The highly articulated figure brings the character to life from the hit anime series Dragon Ball Z. Collectors can recreate the fateful scene where Raditz takes on the might of Goku and Piccolo on earth. This single event set earth’s mightiest heroes on a path no one could have ever dreamed imaginable.

Tamashii Nations has also introduced The Ronin Mandalorian to the Star Wars Meisho Movie Realization figure line. The stylized figure puts the Mandalorian in traditional Samurai armor and ready for battle. Meisho fans have been asking for a new Mandalorian figure, and Tamashii Nations delivers on that request.

Additionally, Premium Bandai USA is giving fans VR Booth Tours of what would have been the Tamashii Nations booth in VR, bringing the magic of their setup straight to your home. Take the tour and learn more about the company’s figures and collectibles, just as if you were shopping their booth on the showroom floor.