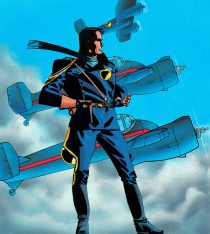 On the heels of their successful collaboration for Ready Player One, Steven Spielberg and Amblin Entertainment are again teaming up with Warner Bros. to produce and direct the action adventure Blackhawk. Based on the classic DC Comics property, Blackhawk will mark the filmmaker’s first feature centered around characters from the DC universe.

The script for Blackhawk is being penned by David Koepp, who has collaborated with Spielberg as a screenwriter on Jurassic Park, The Lost World: Jurassic Park, War of the Worlds and Indiana Jones and the Kingdom of the Crystal Skull. Spielberg will produce the film with Kristie Macosko Krieger, while Sue Kroll will executive produce.

Spielberg’s next two films are the fifth Indiana Jones movie and a new adaptation of the classic West Side Story.