Stop your grinnin’ and drop your linen!

Context:
Bill Paxton as Private Hudson in James Cameron's 1986 sci-fi epic Aliens. Hudson - while doing a satellite sweep - thinks he's found a group of missing colonists on a mining colony set on a distant moon. What he actually found were incubated and/or dead colonists, along with a pack of not so friendly alien creatures. 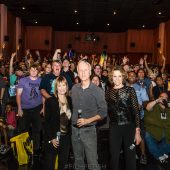