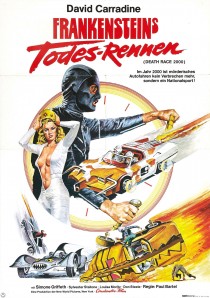 An outrageous action-packed film and reboot of the original Death Race 2000, Roger Corman’s Death Race 2050 began filming this month in Peru. Described as being filled with full-throttle mayhem and black-hearted humor, the all-new film drops the flag on a phalanx of automotive gladiators who earn points for killing pedestrians — and their fellow drivers. Roger Corman’s Death Race 2050 is an original release from Universal 1440 Entertainment. The film will be available exclusively on Blu-ray, DVD and Digital HD later in 2016.

In the decades since well-known independent film pioneer and Academy Award winner Roger Corman first put the cult classic anti-hero Frankenstein into the driver’s seat in Death Race 2000, this over-the-top cult classic has hurtled headlong toward cinematic immortality. Among the most enduring of the prolific producer’s legion of memorable films, Death Race 2000 has inspired a growing fan base that continues to propel the popular franchise as it marks the 40th anniversary of its original release.

“This is an amazing opportunity for me and millions of Death Race 2000 fans to experience the intensity, thrills and dark humor of the original, fueled by a terrific young cast, spectacular vehicles and side-splitting action, literally” said Corman, the trailblazing writer, director and producer. “Roger Corman’s Death Race 2050 puts the pedal to the metal to bring this enduring franchise to a whole new level.”

The film is directed by G.J. Echternkamp (Hard Candy) directs from a script by Matt Yamashita (Sharktopus vs. Pteracuda) and G.J. Echternkamp, and produced by Roger Corman (Death Race 2000) and Luis Llosa (Anaconda).

In the not-too-distant future, America is controlled by an all-powerful corporate government that keeps the masses placated with violent virtual-reality entertainment. The event of the year is the Death Race, where a motley assortment of drivers compete in a cross-country road race, scoring points for running down pedestrians and killing each other. The reigning champion and popular favorite is half-man, half-machine Frankenstein — but little does he know he’s taken on a rebel spy as his co-pilot.

The Universal 1440 Entertainment banner develops and produces live-action and animated non-theatrical productions directly for distribution in all media worldwide. Since its formation in 2005, the group has assembled an exceptional roster of animated family fare, including the Daytime Emmy®–winning Curious George television series for PBS KIDS; the latest installment of the beloved The Land Before Time series, The Land Before Time: Tale of the Brave; as well as a string of hugely popular Barbie and Monster High movies, based on the world-renowned Mattel-branded properties. The group also has successfully built upon some of Universal’s highly celebrated live-action franchises, Scorpion King, Death Race, Jarhead, The Man With The Iron Fists and the terrifying Chucky movies, as well as debuting the Tony Award®–nominated hit touring stage production Bring It On: The Musical and the epic sci-fi adventure hit Tremors 5: Bloodlines. Among projects currently readying for release are the explosive action-adventure Jarhead 3: The Siege; the adrenaline-fueled actioner Hard Target 2, and the high-energy dance drama Honey 3.