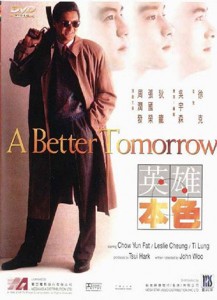 Tsui Hark’s name has come up dozens of times during the filming of Blvd. Warriors. The action film producer has directed Donnie Yen, Maggie Cheung, Brigitte Lin, Jet Li and many more of the biggest Hong Kong action film stars on the 1980’s and 90’s. His films include Dragon Inn (director), Once Upon a Time in China (director), Seven Swords (producer), Zu Warriors (producer), Black Mask (producer) and many, many others. More recently, he produced and directed Detective Dee: Mystery of the Phantom Flame and its 2013 sequel Young Detective Dee: Rise of the Sea Dragon, along with the 2011 film Flying Swords of Dragon Gate.

Some of you may not be as familiar with Patrick Lung Kong, who is considered one of Hong Kong’s most influential filmmakers of the 60’s and 70’s. Kong’s films include the girl gang classic Teddy Girls, and the sci-fi thriller Yesterday, Today, Tomorrow. The filmmaker is best known for his 1967 crime thriller Story of a Discharged Prisoner, which was remade by Tsui Hark and director John Woo as A Better Tomorrow.

Story of a Discharged Prisoner and A Better Tomorrow will be screened on August 15th and 16th, respectively, with Tsui Hark and Lung Kong in conversation afterwards, at the Museum of the Moving Image in Queens, New York.

Patrick Lung Kong will receive a Lifetime Achievement Award from director Tsui Hark on August 15th. This is also the opening night of the Museum of the Moving Image screening series “Yesterday, Today, Tomorrow: The Cinema of Patrick Lung Kong.” The directors will participate in a conversation with Grady Hendrix of the New York Asian Film Festival/Subway Cinema, and Sam Ho, film historian and former programmer of Hong Kong Film Archive.

Get additional information and tickets for these screenings at movingimage.us.