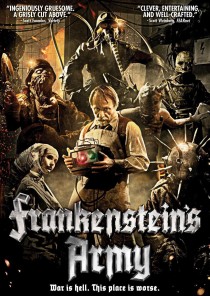 In order to have a chance to win a free copy of Frankenstein’s Army on Blu-ray:

“LIKE” this posting using the Facebook button above the text ON THIS PAGE, PLUS make sure you’ve “LIKED” our Facebook page at Facebook.com/filmfetish. Lastly, post the names of your 3 favorite classic monster movies on our Facebook Timeline and make sure to mention “I just entered the Frankenstein’s Army Blu-ray Contest @filmfetish #filmfetish” in your post. Your entries will not be accepted if you do not follow these instructions and please note that we check profiles to assure fairness. So please do not create multiple profiles or “contest” profiles in order to enter.

“Frankenstein’s Army is funny and original, with innovative costumes and set designs. It’s sure to please horror fans,” says The New York Post.

In the dying days of World War II, a battalion of Russian soldiers find themselves lost in enemy territory in eastern Germany. One soldier (Alexander Mercury, The Golden Compass) has been ordered to make a propaganda film as the squadron makes its way across the wintry landscape, and what follows is a thrilling mix of found-footage shocks and classic horror. Stumbling upon a village decimated by an unseen terror, the Russians are lured into the secret lab of deranged scientist Viktor (Hellboy’s Karel Roden). Viktor has unearthed the journals of the legendary Dr. Victor Frankenstein and has used them to assemble an army of supersoldiers stitched together from the body parts of fallen Germans – a desperate Hitler’s last ghastly ploy to escape defeat.

Leaderless and faced with dissension in their dwindling ranks, the Russians must find the courage to face down this fearsome new brigade of flesh-and-metal “zombots” – or die trying. A nightmarish fantasy thrill ride unlike any other, Richard Raaphorst’s Frankenstein’s Army, which was filmed at abandoned World War II sites in Prague and throughout Europe, is a delirious plunge into the darkest depths of insanity.

Praise for this gripping film has been universal. “Where [it] really shines is with the stunning designs and monster makeup, with the film delivering old-style lumbering monsters without resorting to CGI,” said Mark Adams of Screen International.

Variety’s Scott Foundas called the film “an enterprising addition to the found-footage horror canon that gleefully and gorily imagines what might have happened if the grandson of Victor Frankenstein had gone to work for the Nazis creating deranged mutants out of mixed-and-matched human and industrial parts.” Scott Weinberg of FEAR.net said, “Frankenstein’s Army is so earnestly odd and craftily creepy – and so astutely balanced between homage and originality – it seems a sure bet to become another international horror favorite.”

The MPI/Dark Sky Films theatrical release was an Official Selection at the Tribeca Film Festival and features make-up effects from the masters who worked on the Lord of the Rings and Hobbit films. It co-stars Joshua Sasse (Rogue), Andrei Zayats (X-Men: First Class), Luke Newberry, Quartet) and Robert Gwilym (The Bible).

The “Making-Of Featurette” reveals all facets of the filmmaking process, this 31 minute featurette uncovers everything from Richard Raaphorst’s creature designs, to the film’s pre-production process, to the actual creature creation by the Unreal FX team. 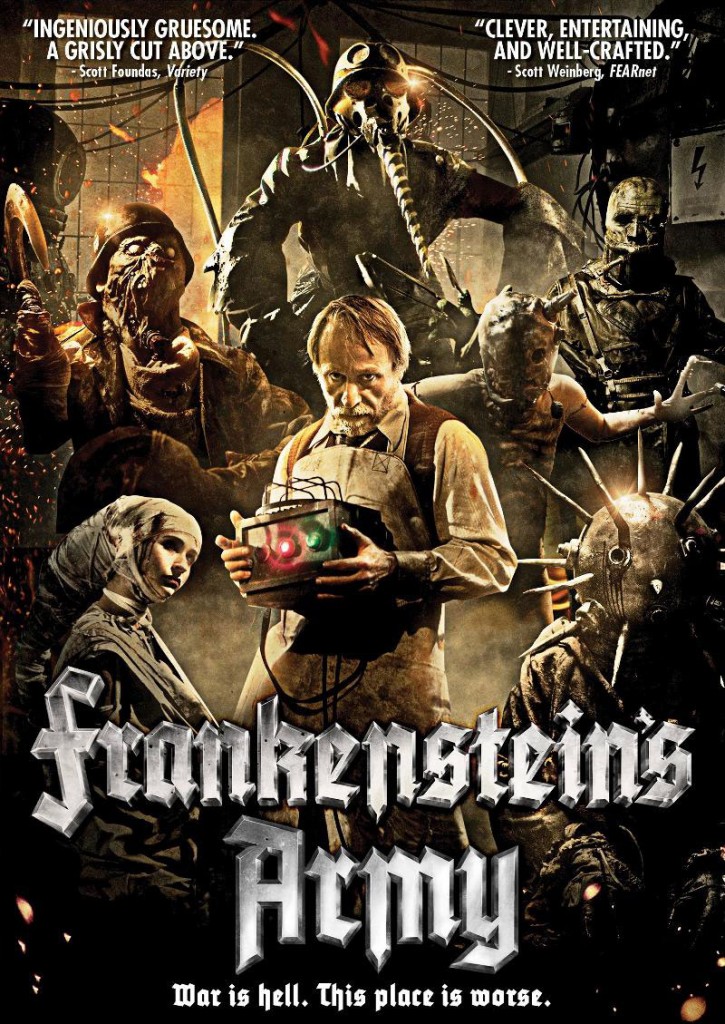