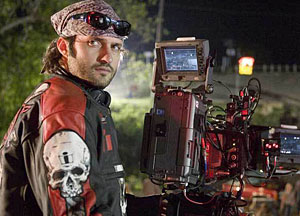 Robert Rodriguez, who’s putting the finishing touches on Machete Kills and working on Sin City 2: A Dame To Kill For, is making a rare convention appearance at Wizard World Chicago Comic Con, which takes place from August 8 through 11, 2013. In addition to his two upcoming film projects, Rodriguez is also prepping the El Rey Network, his new cable channel that will focus on delivering action-related content by Hispanic producers, celebrities and public figures in January of 2014.

Indiewire recently reported that El Rey will be an English-language cable network aimed at young Latino audiences. The first two scripted shows touted by the channel include an adaptation of the cult film From Dusk Till Dawn that Rodriguez will write, produce and direct, as well as an action adventure series from Star Trek writers Alex Kurtzman and Roberto Orci.

The Kurtzman/Orci project, which is described as a 13-episode “Latino James Bond-type series,” will center on a star soccer player/playboy who has a secret life as a spy working for a special branch of the CIA. Orci is writing the script for the pilot, with Rodriguez attached to direct. The series has a reported budget of $40 million, which puts it in firmly into quality drama territory.