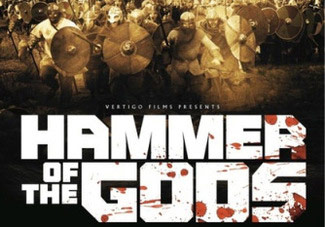 Magnet Releasing, the genre arm of Magnolia Pictures, announced today they have nabbed U.S. rights to Hammer of the Gods, a Viking epic from Vertigo Films and Protagonist Pictures. The feature film debut of Farren Blackburn, Hammer of the Gods is described as a visceral, intense action film starring Charlie Bewley (The Twilight Saga, Like Crazy) and James Cosmo (Braveheart, Game of Thrones), and is produced by Rupert Preston and Hubi Von Liel. Magnet acquired Hammer of the Gods after watching a promo screened at the American Film Market.

Set in the violent world of Viking Britain in 871 AD, Hammer of the Gods is the story of young Viking warrior Steinar (Bewley), sent by his father the King (Cosmo) on a quest to find his estranged brother, who was banished from the kingdom many years before. Steinar’s epic journey across hostile territory gradually sees him emerge as the man his father wants him to be – the ruthless and unforgiving successor to his throne.

Magnet will release the film in 2013 through its trendsetting Ultra VOD program, where it has had considerable success with period action films, notably Centurion, Black Death and 13 Assassins.