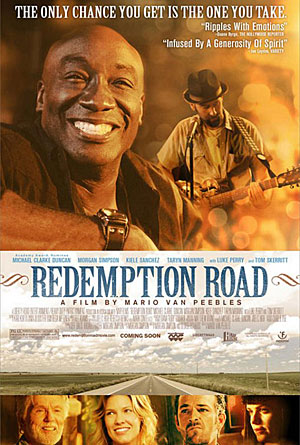 Redemption Road, starring Michael Clarke Duncan (The Green Mile) and Morgan Simpson (Clear Lake, WI), tells the story of Bailey (Simpson), a talented but troubled blues musician who travels to Alabama with a mysterious man named Augy (Duncan) to accept unclaimed property after the death of his grandfather. Over the course of the road trip, Bailey’s story unfolds as we learn more about his family history and the blues music he has always felt connected to. Augy knows more about Bailey than he lets on and, with his help, Bailey manages to use the music he has in his soul to take control of his life and set off on a new path, one that allows him to put his past to rest.

One Fall, centers on a man (Marcus Dean Fuller) who is both blessed and cursed with an unusual power, and is set in the rustic Midwestern town of One Fall. In the film, Fuller’s character miraculously survives a terrible fall from a spectacular 200 foot-high precipice that is the area’s major attraction. After recovering, he develops the power to heal others and decides to use his gift for profit. Though he appears to be doing the right thing, he is acting for all the wrong reasons, and risks driving away anyone who ever loved or trusted him. As his moral crisis peaks, he must figure out why he survived his fall, and what he is really meant to do with his life.

One Fall, written by Fuller and Richard Greenberg, also features Zoe McLellan, Seamus Mulcahy, and was produced by Marlen Hecht and Dean Silvers.

Freestyle Digital Media’s recent slate of films includes Deadheads, the acclaimed horror-comedy from directors Brett and Drew Pierce, Swinging with the Finkels starring Mandy Moore and directed by Jonathan Newman, and Tomorrow, When the War Began directed by Stuart Beattie, which also marked the first feature film debut on Facebook back in February.