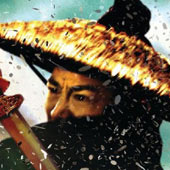 IMAX and leading Chinese film distributor Bona Film Group, today announced that the 3D martial arts motion picture Flying Swords of Dragon Gate will be released in China, in the IMAX 3D format starting this Thursday, December 15th. The film will be released on 61 digital IMAX screens across China. Throughout its theatrical run, Flying Swords of Dragon Gate will represent the only native Chinese film playing within the IMAX network.

“As the first-ever 3D Chinese feature film, this motion picture represents an important milestone in the Chinese film industry,” said Bona Film Group’s Dong Yu. “We are proud to partner with IMAX to present a stunning cinematic experience that will transport fans into the intensity and action of Tsui Hark’s epic martial arts tale.”

“Flying Swords of Dragon Gate is a great culmination of our 2011 film slate and we could not think of a better way to end the year than with this powerful film,” said IMAX Chairman Greg Foster. “As our theatre network in China continues to grow, so does the demand for local-language films to be presented in IMAX. Today, we are delighted to join forces with Bona Film Group and offer Chinese movie-goers what they want – the best in Chinese film in the most immersive format available.”

Flying Swords of Dragon Gate: An IMAX 3D Experience will be digitally re-mastered into the image and sound quality of The IMAX Experience with proprietary IMAX DMR (Digital Re-mastering) technology for presentation in IMAX 3D. The crystal-clear images, coupled with IMAX’s customized theatre geometry and powerful digital audio, create a unique immersive environment that will make audiences feel as if they are in the movie.

In Flying Swords of Dragon Gate, Chow Wai-On, a Ming Dynasty general played by Jet Li, finds himself at odds with Yu Hua-Tian (Aloys Chen Kun), an evil, power-hungry eunuch. Eventually, these two adversaries cross paths with Lin Yan-Qiu (Zhou Xun) at the titular Dragon Gate Inn, a remote outpost in the desert at the very frontier of the kingdom.