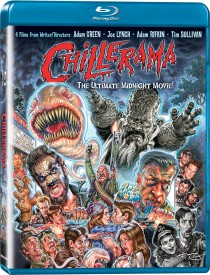 From the depraved minds of directors Adam Rifkin (Detroit Rock City, The Dark Backward), Tim Sullivan (2001 Maniacs,VH-1’s Scream Queens), Adam Green (Hatchet, Frozen), and Joe Lynch (Wrong Turn 2, Knights of Badassdom), and in the tradition of the original Return of the Living Dead, Chillerama is a festival of gore and good times. It’s a midnight movie to the extreme, along with two hours of insightful and highly watchable unseen bonus features that delve deep into the creative process of these four directors of the macabre. If you can appreciate bad taste in your humor than Chillarama is for you.

Produced by ArieScope Pictures and channeling cult classics such as Dead of Night, Tales From the Crypt, Creepshow and Twilight Zone: The Movie, these four vignettes not only celebrate the golden age of B horror but also nearly the entire history of horror cinema itself. Chillerama’s segment titles say it all: Wadzilla, I Was A Teenage Werebear, The Diary of Anne Frankenstein, and Zom-B-Movie, and with appearances by Joel David Moore (Avatar, Hatchet), Lin Shaye (Insidious), Ray Wise (X-Men: First Class), Kane Hodder (Hatchet and Hatchet II), Eric Roberts (The Dark Knight, Sharktopus) and many more, Chillerama is a ride that must be taken at least once.

Bonus features on the Chillerama Blu-ray include:

Check out clips and images from Chillerama below.

Chillerama – Film Clip: I Was a Teenage Werebear: “Bear Brawl”

Chillerama – Film Clip: I Was a Teenage Werebear: “Team Melvin”