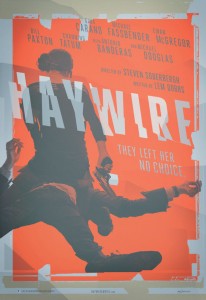 Don Steinberg from The Wall Street Journal just published an article on martial arts films titled Hollywood’s New Kick, which discusses how martial arts films are going mainstream (it took long enough!). This article was first mentioned to me by Anesti Vega, who works and trains with rising martial arts action star Marrese Crump, who I discussed in a previous post.

The piece mentions projects by the likes of Russell Crowe and Steven Soderbergh (Crowe is co-starring in Man With the Iron Fists with The RZA and the Soderbergh-directed action thriller Haywire marks the big screen debut of female MMA star Gina Carano) among others, and gives a brief history of martial arts films in America. Gareth Evans, a Welshman who directed an Indonesian action film titled The Raid (which features the martial art known as silat), says of the genre:

According to the report, Hollywood is gearing up with bigger-budget films, with better scripts, noting that while Avatar and Inception were big hits in China, Kung Fu Panda 2 broke the opening-weekend records there this past summer. Other projects on the horizon include Ryan Gosling, who’s been training in Muay Thai to star in Only God Forgives, about an exile in Bangkok fighting gangsters, which will be directed by Drive director Nicolas Winding Refn. Leonardo DiCaprio is apparently attached to a planned series of films based on the Don Winslow novel Satori, about a martial arts-trained assassin. Keanu Reeves – who’s already kicked ass Asian style in The Wachoski’s The Matrix – recently wrapped the film 47 Ronin, a Japanese martial arts epic due in theaters in November 2012. Reeves also plans to make his directorial debut with Man of Tai Chi, which he says will include 18 fights and 40 minutes of kung fu action.

The article also hails the successes of Crouching Tiger, Hidden Dragon, as well as the extremely successful remake of The Karate Kid, with Jaden Smith. It even gives props to the African American and Hispanic audiences that supported Hong Kong films long before they went “Hollywood.”

Maybe my documentary – built of more than 30 years of watching martial arts films, overcoming my own fears, and my undying need to get at the bottom of things – comes along at just the right time.