Lionsgate has unveiled a new motion poster for their upcoming 3D reboot of Conan the Barbarian on IGN. The poster is the first official artwork from the movie, which is being directed by Marcus Nispel (The Texas Chainsaw Massacre, Friday the 13th). Nu Image/Millennium Films is releasing Conan the Barbarian 3D on August 19, 2011, with Jason Momoa in the title role opposite a cast that includes Ron Perlman, Stephen Lang, Rose McGowan and Rachel Nichols.

Conan the Barbarian 3D follows Conan’s quest across the continent of Hyboria, as he fights to avenge the murder of his father and the slaughter of his village.

Check out the motion poster for Conan The Barbarian in 3D below. 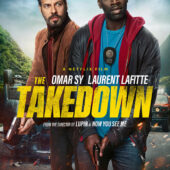