Being a big fan of both comicbooks and U2 it only makes sense that I make “Spider-Man: Turn Off the Dark” my Broadway debut as far as reviews are concerned. Let me start off by saying that I was late in arriving to the theater and in doing so missed the first two numbers. Shame on me especially given current Broadway ticket prices. Also given the fact that there is still a month of previews to go before the official opening, and Bono and The Edge have vowed to attend every one of these previews in order to make adjustments to their contributions, it leaves me to believe that there will be improvement. So saying that let me begin.

“Bullying by Numbers” the first number I took in did not impress me. Not only from a musical point of view but also because of the scenery and choreography. Maybe it was a case of me being embarrassed by the content of the lyrics, something to the effect of “Peter Parker’s pecker” as he’s being teased by the popular girls (Was high school really that brutal?). The following song “No More” was much better but the next few scenes also need work. The short scene with Flash and the car needs a complete make over as does Norman Osborne’s lab which looked sort of 1950’s retro sci-fi and is adorned with Spencer Gifts-style schlock props, including the over the top silver lab coats. Being the fan boy that I am I did pick up and appreciate the shout out to Spider-Man creators/contributors (Steve) Ditko, (Stan) Lee, (John) Romita (both Sr and Jr I would imagine) and (Michael) Strazynski. The scene divulging Peter’s newly acquired powers in his bedroom also needs some work. The combination of the initial appearance of the unsightly airial harness, the moveable walls and ceiling (anchor them please), exposing the stage workers, and the forgettable song, make this key moment a real disappointment.

Also overall I don’t think that the four teenage narrators who show up between some scenes add any value. They’re not really shedding any light on anything. As far as the scenery is concerned, the projected visuals and city scenery were great! Especially the birds eye view looking down from the top if the Chrysler building. Very innovative and reminescent of a comic panel as is the aerial acrobatics. I did not like the primitive comic book style of the small props and some scenery. We know it’s based on a comic book, but come on! I thought everyone learned their lesson from Ang Lee’s mistakes on the motion picture “The Hulk”? The costumes for the most part are great except for the big headed villains. It’s a fact that Julie Taymor is famous for her creation and use of masks in Broadway productions, but in my opinion this production would have looked much better using make up.

I must say though that from the point of the scene including the song “Rise Above”, the production improves greatly. Don’t get me wrong, there were some exceptonal performances during the show, just not in a few of the early numbers. I know that some of my critiques are rooted in the fact that in the last decade Hollywood has presented this same story and it’s presentation as far as effects are concerned can not be matched by Broadway, but I must also say that the production would have received a much needed shot in the arm by enlisting a the experience of a comic book insider such as the aforementioned Michael Strazynski to put a little more authenticity and feeling into the story and characters.

If the creators of “Spider-Man: Turn Off the Dark” address some of the issues I brought up then I think it will enjoy a successful run on Broadway. If not, then I’m not so sure that will happen.

Story C+, Music B-, Performances B+, Choreography B, Scenery, Special effects and costumes B+ 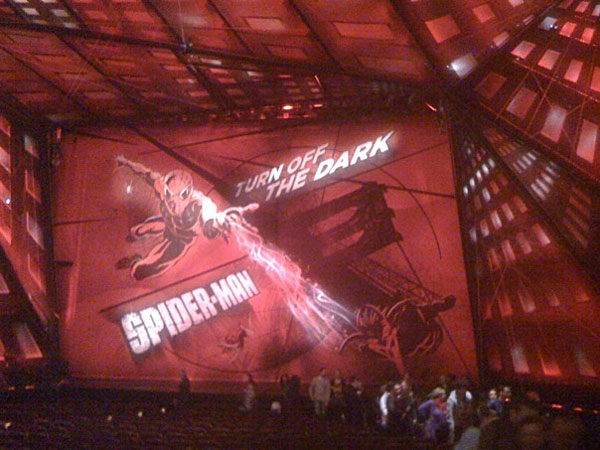