With a dramatic tension that would rival most country disputes, the spirited roar of the fans with every basket made, and a video resolution of 1080p, Image Entertainment’s 2010 NBA Finals Series Collector’s Edition Blu-ray – featuring the two years in the making rematch between the Los Angeles Lakers and the Boston Celtics – is a must for fans of either team, and for fans of the game of basketball.

The 2010 NBA Finals renewed the historic rivalry between the two franchises, one that has its roots all the way back to 1950, when the Los Angeles Lakers became the first of any NBA team to win an NBA championship. But it would be The Celtics – a team that has powered down a record 17 NBA Championships – who have been able to lay claim to the bragging rights of having the “Most NBA Championships”.

The 2010 series exceeded all of its hype as the Lakers and Celtics picked up where they left off in 2008 when the Celtics defeated the Lakers rather handily, to earn their 17th NBA title. The Lakers, led by 2010 Finals MVP Kobe Bryant, took the series to Game Seven and, down by 13 points in the third quarter, came back to repeat as champions in the most-watched NBA game in over a decade. It was such an exciting series to watch again, and even though I’m a Boston fan, I couldn’t help but admit Kobe’s “Not on my watch attitude”, lifting his team’s spirits and, when necessary, taking over the game.

Disc 1 to 3 of this thorough Blu-ray set features two games from the series, with the now storied game 7 on a 4th disc, along with bonus materials. Each game also features a short film which provides an overview of that contest, the condition of the players, and where things stood up to that point in the series, along with the sights and sounds leading up to that game, such as sound bites from coaches, players, fans and commentators. For hardcore fans, each disc is also filled with team score and statistical breakdowns for each quarter, including field goal percentages, rebounds, turnovers, blocked shots and fouls. 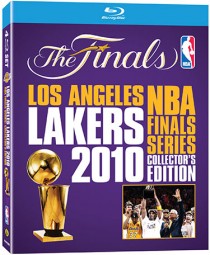 One of the more hilarious moments of the Bonus Material, is the now infamous Game 7 post-game interview with Ron Artest, where – caught up in all the emotions of the moment – begins to thank everybody… including his ‘hood’.

This definitive box set, filled with post-game press conferences, interviews and reflection, will certainly give fans an all-access view of both teams both on and off the court, and in the locker room.