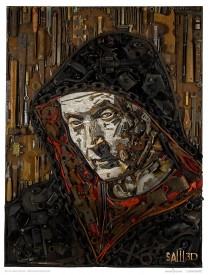 Lionsgate is doing some viral marketing around the upcoming Saw 3D, with the website BobbyDagen.com. The name shouldn’t strike you as anything important yet, but Bobby Dagen is intricately tied into the events that unfold in Saw 3D. Bobby Dagen, (Sean Patrick Flannery), is a survivor of one of Jigsaw’s tests who is speaking out about his experience on his blog and in a new book featured in Saw 3D. New survivors will be introduced there on a weekly basis, introducing new clues that lend insight into the “final chapter” of the series.

Also, Lionsgate and Twisted Pictures have announced that on Thursday, October 28th, there will be an epic nationwide “Saw Fan Appreciation Night”. Lionsgate has partnered with RealD to bring this special opportunity to the loyal Saw fanbase. Theaters will be offering a ‘Limited Edition’ pair of Saw 3D glasses as a gift with purchase for the Thursday night shows. Fans that attend the 8pm, 10pm, and midnight shows will get the bragging rights of glasses that say “I SAW IT FIRST 10.28.10”.

CLICK HERE or on the image above to see the full-size version of the new Saw poster by pop artist Jason Mecier.