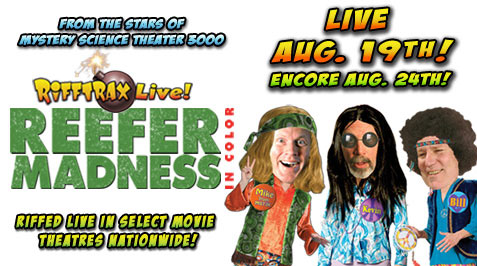 Fans of the legendary hit show Mystery Science Theater 3000 (MST3K) and internet sensation RiffTrax.com are in for a hilarious night of live comedy on Thursday, August 19 when NCM Fathom, Something Awful and RiffTrax team up again to present RiffTrax LIVE: Reefer Madness at 8:00 p.m. Eastern / 7:00 p.m. Central / 6:00 p.m. Mountain / 8:00 p.m. Pacific (tape delayed) with an encore on Tuesday, August 24th. The creative team behind MST3K – Michael J. Nelson, Kevin Murphy, and Bill Corbett – will reunite on the big screen for an evening of LIVE riffing on the 1936 cult classic feature that warned generations of Americans against the horrors of excessive marijuana consumption. Audiences will also receive access to FREE digital goodies after the event including a downloadable short, avatars and a digital photo of the guys.

“Reefer Madness is bizarre, paranoid and hilarious, everything we like in a movie,” said Michael J. Nelson, RiffTrax creator and former host of the Emmy-nominated, Peabody Award-winning Mystery Science Theater 3000. “I’ve seen it a hundred times and I still find it funny—and I’ve never even smoked pot!”

Originally titled Tell Your Children and financed by a church group, Reefer Madness was intended as a morality tale about the dangers of cannabis use. The story follows a group of high school students who are coerced by pushers into trying marijuana; the catalyst for an ill-fated party that soon descends into madness. Soon after Reefer Madness’ initial filming in 1936, notorious exploitation filmmaker Dwain Esper turned up the intensity with the addition of salacious insert shots. The final piece offers scenes of accidental murder, suicide and vehicular manslaughter.

For the first time ever, fans have the chance to hear their own joke used in the live event by submitting a riff for one – or all ten of the short clips available for riffing from Reefer Madness. Riffs may be submitted at RiffTrax.com/contest through Wednesday, Aug. 18 at 11:59 p.m. Pacific. One winner for each clip will be selected by the RiffTrax guys and each winner will receive a RiffTrax Swag Bag and an on-screen credit in the event.

MST3K spent a total of 11 seasons on Comedy Central and the Sci Fi Channel in the late 1980s through 1999. The series featured a man and his robot sidekicks trapped in space by an evil scientist and forced to watch terrible science fiction B-movies. In each episode, the three make fun of each film, providing hilarious commentary or “riffing.” After the show’s run ended, Nelson created RiffTrax in 2006 to continue the “riffing” on blockbuster films such as Star Wars: Episode I and Star Trek. RiffTrax are downloadable online and can be played along with the film, providing a unique and amusing commentary throughout the course of the movie. The RiffTrax team made their big screen debut last August with RiffTrax Live: Plan 9 from Outer Space and returned in December 2009 with RiffTrax LIVE: Christmas Shorts-Stravaganza.

Tickets are available at participating theater box offices and online at www.FathomEvents.com.