On Tuesday May 4th, Walt Disney Studios Home Entertainment released Iron Man: The Complete 1994 Animated Television Series and X-Men: Volume 5 on DVD. Stan Lee presents Marvel’s complete 1994 animated television series, Iron Man, in a 3-disc edition, along with a series of original tales straight out of Marvel comic books in Volume 5 of the X-men collection, which is presented in a two-disc set.

The X-Men television series, which ran from 1992-1997, stayed faithful to its source material, creating rich story lines and characters that sparked increased interest in the comics. 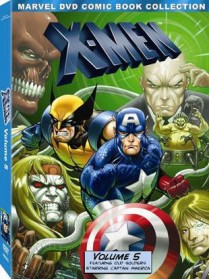 While the quality of the animation and stories in Season 5 shows some deterioration, there are certainly enough good episodes to warrant including this volume in your collection. Season 5 also tips its hat to fans with a series of new guest characters, including Longshot, Warlock and Captain America, which make episodes like Old Soldiers – where Wolverine and Cap fight off the Red Skull – much more interesting. Some of my favorite episodes in the season also include Longshot, No Mutant Is An Island, Hidden Agendas and A Deal With The Devil, all of which maintain the quality of earlier seasons of the show.

X-Men was one of the best animated series of its time, and The Volume 5 DVD Set is an integral addition to the entire collection, featuring exciting guest appearances, complimentary story lines, and a feeling of nostalgia that makes the shows well worth watching again.

The two biggest drawbacks for both of these X-Men and Iron Man DVD releases is the poor quality of the video transfers and the complete lack of bonus material in both editions.

When Marvel decided to launch the Iron Man animated TV series in 1994, it marked the first time Tony Stark’s alter-ego would have a chance to get the solo spotlight since his first TV appearance as one of the rotating character segments on the 1966 TV show Marvel Superheroes.

Unfortunately, the 1994 Iron Man animated series did little to bolster the image of the character, leading to its cancellation after only two seasons. This was due to a formulaic story line, usually featuring The Mandarin and his team of villains concocting a master plan involving technology – whether it was his own or Stark’s. They usually went toe-to-toe against Iron Man and his crew, which included War Machine, Hawkeye, Spider-Woman, The Scarlet Witch and Century. 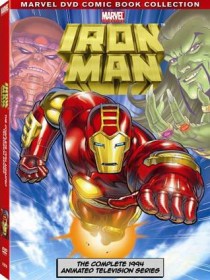 This 3-disc set collects all 26 episodes of the series, each season with its own weaknesses, along with some notable strengths. Season 2 saw a dramatically improved quality of animation and story lines. Some of the best episodes were created during Season 2 of the show, including Origin Of Iron Man & The Armor Wars 2-episode story lines, Cell Of Iron, and Hulk Buster, which featured Iron Man battling The Incredible Hulk. However there’s nothing in the entire series that sparks of originality, in-depth character development, or that the show’s creators took the source material all that seriously.

While today’s hero stories are made for a much more sophisticated and adult audience to appreciate, the 1990s Iron Man series ws clearly intended to appeal strictly to children, and compared to the quality animation and stories of today, it doesn’t hold up very well in that regard either.

For those diehard fans of The Avengers, Iron Man and the related characters, this 3-disc will be enjoyable to compare to where the Marvel Universe has progressed cinematically. It also has a cult appeal, and could be watched by fans who grew up on this series. You’ll certainly have some nostalgic fun seeing it again. Comic readers will also be amused by the show’s incarnations of the various villains and heroes from the pages comics.

Below are clips from both editions.

The End of Iron Man?

Iron Man to the Rescue!