Michael Apted (Up series of 7 year update documentaries, Blink, Extreme Measures, The World Is Not Enough) is directing the new film, which is due in theaters on December 10, 2010. Ben Barnes returns as King Caspian, Georgie Henley, Skandar Keynes, Will Poulter, Eddie Izzard, Liam Neeson, Gary Sweet, Arthur Angel, Tony Nixon and Shane Rangi as the Minotaur. Might be worth watching, just to see what they do with the Minotaur.

Click on the image below to get a larger view. 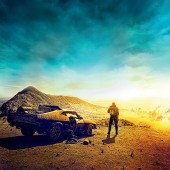