Slumdog Millionaire is loosely based on the fictional novel Q and A by Vikas Swarup, which tracks the life of Jamal Malik, an 18 year-old orphan from the slums of Mumbai, who never received a formal education. After losing his mother to fanatical religious violence, Jamal (played as a teen by Dev Patel) and his brother Salim (played as a teen by Madhur Mittal) must do anything they can to survive. Their travels are filled with memorable encounters, both good and bad. Along Jamal’s difficult journey he meets another orphan child, Latika (played as a teen by Freida Pinto), but loses her in the haze of violence, turmoil and desperation that has followed him and his brother their whole lives. 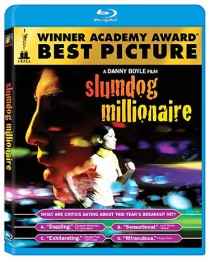 Now Jamal is on the verge of experiencing the biggest day of his life. With the entire nation of India watching, he is just one question away from winning 20 million rupees on the Indian version of Who Wants To Be A Millionaire? But since doctors, lawyers, and other “educated” people haven’t come close to what Jamal has accomplished, the show’s host (played by veteran Indian thespian Anil Kapoor) has the police interrogate the young man, after the show breaks for the night; how could a ‘slumdog’ know so much? Desperate to prove his innocence, Jamal tells the story of his life in the slum where he and his brother grew up, of their adventures together on the road, of vicious encounters with local gangs, and of Latika, the girl he loved and lost. Each layer of his story, every component of his ‘urban education’, reveals a key to the answer to one of the game show’s questions.

But one question remains a mystery: what is this young man with no apparent desire for riches really doing on the game show? When the new day dawns and Jamal returns to answer the final question, the Inspector and sixty million viewers are about to find out. At the heart of its exuberant storytelling lies the intriguing question of how anyone comes to know the things they know about life and love. Slumdog Millionaire gives the world a glimpse into the harsh existence of homeless children living in Mumbai, while injecting supreme optimism and spirit.

Director Danny Boyle (Trainspotting, Millions, 28 Days Later) fills the screen with color and exuberance, while cutting through the many layers of suffering within the ghettoes of Mumbai, highlighting the vital culture and beauty that wills a people to continue to grow and develop.

Bonus Features
The rich collection of Bonus Features in the set, enhance the viewing experience of Slumdog. Disc one starts off with a lively and comedic Commentary Track with star Dev Patel and director Danny Boyle. The pair share several on-set anecdotes, and discuss what it was like shooting the film on location in India. The second commentary track features producer Christian Colson and writer Simon Beaufoy, both of whom discuss the more technical aspects of crafting the project. This track is also well done, although the tone is not as light as the first.

The set also includes a set of informative Deleted Scenes, which are all presented in Standard Definition. They fill some gaps in the storyline and are not placed on the disc for filler. The scene titles include:

The featurette Slumdog Dreams: Danny Boyle & The Making of Slumdog Millionaire, was a concise look at the making of the film, and there’s an added vignette just on the shooting of the hilarious toilet scene, called From Script To Screen: Toilet Scene.

Manjha is an Indian short film, that actually runs over 40 minutes. It’s a nice cultural piece, but may not be for everyone. The disc is rounded out with a music video entitled Bombay Liquid Dance, along with the American (HD) and European (SD) theatrical trailers.

Disc two contains a handy digital copy, for your PDA or other mobile device. Digital copies are great for frequent travelers, or anyone with a long train commute.