In 1989, two-time Academy Award nominee and visionary filmmaker Spike Lee (Inside Man) mesmerized audiences with one of the most insightful and provocative films of its time – Do the Right Thing. Universal Studios Home Entertainment celebrates the 20th Anniversary of this provocative drama with an all-new special edition coming to Blu-ray Hi-Def and DVD on June 30, 2009 – exactly 20 years from its theatrical debut. Digitally remastered for optimum picture quality and featuring all-new 5.1 Surround Sound, Do the Right Thing – 20th Anniversary Edition is loaded with over 4 hours of revealing bonus material, including a never-before-seen retrospective documentary with cast and crew, a new feature commentary from Lee, and newly discovered deleted and extended scenes.

Bonus features on Do the Right Thing – 20th Anniversary Edition Blu-ray Hi-Def and 2-Disc DVD include: 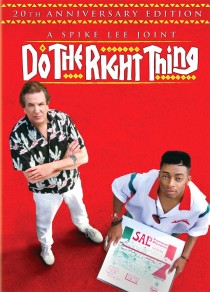 Visionary filmmaker Spike Lee is at the top of his game in this film about a racially divided neighborhood facing a scorching summer heat wave. On the hottest day of the year, the Bedford-Stuyvesant area of Brooklyn becomes a crucible for the wide-ranging racial, social and economic beliefs of its residents. During a 24-hour period that changes lives forever, the neighborhood’s tenuous equilibrium boils over into a showdown between longtime business owner Sal (Danny Aiello) and the neighborhood’s African-American majority. In a slyly funny and riveting expose of racial tensions in the inner city, Lee unflinchingly confronts profoundly sensitive issues as violence threatens to explode against a throbbing musical backdrop.