This is a great contest – and easier to enter than the contests I sponsor on FilmFetish.com. DC Comics and San Diego Comic-Con are sponsoring the MAD About Comic-Con Sweepstakes, giving you the chance to win a an all expense paid trip for two to San Diego during the 40th Anniversary edition of the largest pop culture event in the United States.

The Grand Prize includes airfare and hotel accomodations for two to San Diego, two tickets to San Diego Comic-Con AND spending money! But don’t feel crappy if you don’t win that amazing prize. Ten First Place winners can win the new animated Wonder Woman film on DVD. I recently watched a screening of the film at New York Comic Con, and trust me – this film is incredible. Along with the DVD, you also get a pair of DC Comics Sneakers from Limited Soles, and a HAWX Video Game from Ubisoft. 25 Second Place winners will get The DC Comics Encyclopedia from DK Publishing, and Shin Chan Season 2 (Part 1) on DVD from Funimation. Plus 50 Third Prize winners will receive MAD About the Movies from Metro Books.

That’s a lot of swag. 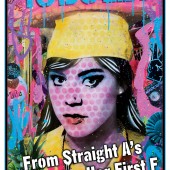