Off we go, into the wild green yonder!

I’ll be running this contest through the release date of February 24th 2009, so good luck! 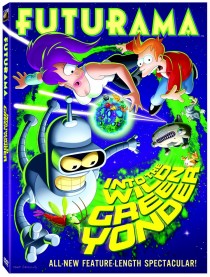 In addition, fans of the series will be thrilled and relieved to finally discover the truth about Number 9 Man, a deeply mysterious character from the earliest days of the series.

Synopsis
All the other galaxies will be green with envy! In this all-new Futurama extravaganza, mankind stands on the brink of a wondrous new Green Age. But ancient forces of darkness, three years older than time itself, have returned to wreak destruction. Even more shocking: Bender’s in love with a married fembot, and Leela’s on the run from the law – Zapp Brannigan’s law! Fry is the last hope of the universe… so if you’re in the universe, you might want to think about going somewhere else. Could this be the end of the Planet Express crew forever? Say it ain’t so, meatbag! Off we go, Into the Wild Green Yonder!

Futurama: Into The Wild Green Yonder will be presented in widescreen format with English Dolby Surround 5.1, along with English, French and Spanish subtitles.