Cheo Hodari Coker, who wrote the script for Notorious, and has been contracted to pen the urban autos tale Lowriders, is attached to adapt Bill Adler’s book Tougher Than Leather: The Rise of Run-DMC for production company DJ Classicz, which is part of Davis Entertainment. This, according to The Hollywood Reporter.

The biopic will explore the history of hip-hop’s first superstars – Joseph “Run” Simmons, Darryl “DMC” McDaniels and Jason “Jam Master Jay” Mizell, who was shot to death in a Queens recording studio in 2002.

Run-DMC exploded from Hollis, Queens onto the international stage with the help of future mogul and Run’s brother, Russell Simmons. An early MTV staple and platinum-selling group, they influenced much of rap’s future stars. According to the report, Run-DMC will also be inducted into the Rock and Roll Hall of Fame on April 4, 2009. 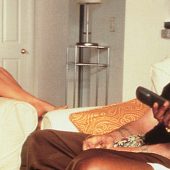