On February 10th 2009, Spike Lee’s acclaimed World War II drama Miracle at St. Anna, comes to DVD and Blu-ray Hi-Def, from Touchstone Home Entertainment. To celebrate the release, Touchstone has provided FilmFetish.com with three (3) copies of the DVD version of the film, and I’m giving them away to readers very soon.

To get your chance to be in the random drawing for one of the Miracle at St. Anna DVD prizes, here’s what you need to do:

I’ll be running this contest through the release date of February 10th, so good luck!

More about Miracle at St. Anna
Acclaimed filmmaker Spike Lee presents an explosive look at the lives of four African American soldiers trapped behind enemy lines during World War II in Miracle at St. Anna coming to DVD and Blu-ray Hi-Def on February 10, 2009 from Touchstone Home Entertainment. An epic tale depicting the indomitable human spirit in the face of shocking devastation, this stirring story is even more revealing with exclusive Blu-ray bonus features that take viewers deeper into the world of these unsung heroes with a fascinating documentary featuring WWII vets and Spike Lee that illuminate the untold story of America’s “Buffalo Soldiers,” the U.S. Army’s all-black regiment.

Directed by award winning Lee (Do the Right Thing, 4 Little Girls), and based on the highly acclaimed novel by James McBride, Miracle at St. Anna is a powerful story of faith, courage and sacrifice. Critics give this film high marks, calling Miracle at St. Anna…

“One of Spike Lee’s best and most important films. Honest, powerful, and inspiring, Miracle at St. Anna is one of the best films of 2008.” 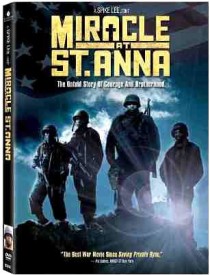