The Usual Suspects, the heavily hyped new film from Bryan Singer, is finally here, and with it comes the answer to the riddle posed in its high-powered ad campaign, "Who is Keyser Soze?"

Keyser Soze is a semi-mythical crime kingpin who ultimately directs the actions of five small-time hoods. With the promise of $91 million and the opportunity to keep their lives, the enigmatic Keyser sends the quintet on a fool’s errand in San Pedro harbor: to stop a competitor’s huge cocaine sale that would interfere with Keyser’s own drug operation. As the film opens, we see the catastrophic results of the mission. The Usual Suspects puts some neat twists on the classic crime drama, and it’s one of the blackest comedies you’ll see this year. All the actors nail their parts with ultra-cool finesse, and just listening to Del Toro mumble his lines is worth the cost of the ticket alone. Singer’s direction is also completely on target.

My problems with the film come from the plot. The primary difficulty is that the movie sometimes gets a little too clever for its own good, the same problem Hal Hartley ran into with this year’s Amateur. While it keeps you in stitches, the film takes its multi-layered riddles a little too far, and while this is somewhat critical to the film, it’s still a bit much. The end result is a picture bogged down by the weight of maintaining an overdone mystique.

The other "minor" problem is the mystique itself, regarding the identity of Keyser Soze. 45 minutes into the film, I placed my bet on the name of Soze’s alter-ego. An hour later, I won, despite some rather unfair trickery on behalf of the script. While the flashback clues can be very misleading (a la Hitchcock’s Stage Fright), they never come out and deliberately lie to the viewer. Regardless, it still shouldn’t stop the audience from figuring it all out, well in advance.

Despite all this, The Usual Suspects is a funny, visually stunning, and much-needed change of pace from recent thrillers, which have had the originality of a Xerox machine. I’m happy to say that this one’s no copy.

A newly-released DVD features commentary from Singer and writer Christopher McQuarrie as well as a separate track from the editor(!). Additional bonus features abound. 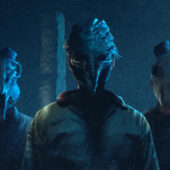