The Film Library has new photos from the A Scanner Darkly adaptation. I also posted the first one sheet from the film.

A Scanner Darkly is set in a future world where America has lost the war on drugs, an undercover cop, Fred (played by Keanu Reeves), is one of many agents hooked on the popular drug Substance D, which causes its users to develop split personalities.

A Scanner Darkly opens on September 16, 2005. Check out the new photos and the movie poster RIGHT HERE » 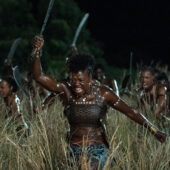