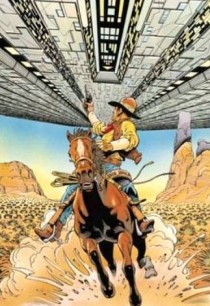 Fresh off his success in Marvel’s Iron Man, Robert Downey Jr. is negotiating to star in the long-in-development Cowboys and Aliens, according to The Hollywood Reporter. The DreamWorks/Universal co-production is based on a graphic novel written by Fred Van Lente and Andrew Foley. The companies may set Cowboys and Aliens up as a 2010 tentpole and expect to attract more major talent to jump on board. I’m sure Platinum Studios, who have been working on this project for ages, is still involved as well.

The story is described as a pulpy mix of the sci-fi and Western genres that centers on a bloody Old West battle between settlers and Native Americans, for control of the land, including a former Union Army gunslinger named Zeke Jackson (Downey’s character) and Miss Verity, that is interrupted by a spaceship crash-landing near Silver City, Arizona. The sworn enemies must work together to save humanity from the threat.

I enjoyed the original comic, and have been looking forward to the property coming to the big screen ever since Steven Spielberg came on board as a producer. It makes a lot of sense that his DreamWorks’ is producing the upcoming adaptation.

Film Fetish Trivia: Steven Spielberg is currently working with Michael Bay on Transformers: Revenge of the Fallen, the sequel to the mega-hit. According to reports (which could be bogus), the story revolves around the impending battle for the universe. After returning to Cybertron, Starscream assumes command of the Decepticons, and has decided to return to Earth with force. The Autobots, believing peace was possible, find out that Megatron’s dead body has been stolen from the US Military by Skorpinox, who revives him using his own spark. With both sides getting reinforcements, the battle is looking to get amped up in a big way.