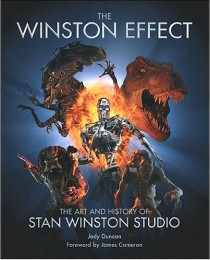 Oscar-winning visual effects artist Stan Winston died at his home in Los Angeles, CA last night, on Father’s Day, June 15th, after a long struggle with multiple myeloma, according to Variety, and representatives from Stan Winston Studio. Wow, I had no idea this legend of special effects had this disease, although I briefly met him at a con, when he was helping promote the low budget vampire film Skinwalkers, and he seemed a bit under the weather. But I wrote it off as a simple flu. That was about two years ago.

For decades, his animatronic creatures were the best in the industry and his prosthetic makeup was groundbreaking. As an artist myself, I have great respect for these guys as true artists, that are so under-appreciated in the art world. But truly, there should be a mega-museum dedicated to this craft. Stan Winston could have a museum dedicated to just him, in fact.

It’s a big loss. Our industry has lost one of its giants, someone who has had a tremendous impact on helping tell stories with the use of effects.

Winston is survived by his wife, Karen, a son, daughter, brother and four grandchildren.

Here is a partial list of projects that benefited from his craft: