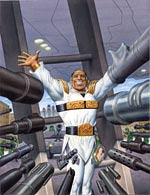 Gale Anne Hurd’s Valhalla Motion Pictures, producer of Marvel Studios’ Summer release The Incredible Hulk, and Platinum Studios, an entertainment company that controls an international library of more than 5,600 comic book characters which it adapts, produces and licenses for all forms of media, today announced a deal to co-develop and produce a feature film based on the soon-to-be-published action thriller comic book Final Orbit. The graphic novel is slated for release by Platinum Studios Comics in early 2009.

Final Orbit tells the story of some lottery winners who are vacationing on the International Space Station but when it is damaged, the vacation becomes a nightmare, trapping the tourists alone in a crippled module with no astronauts to help them.

“Final Orbit has all of the classic cat-and-mouse, edge-of-your-seat elements to be a fantastic white-knuckle thriller,” said Hurd, Chairman of Valhalla Motion Pictures. “Being able to develop the motion picture alongside the comic book allows for the cross pollination of creative ideas that benefit both avenues.”

“I believe that Gale has the unique sensibility to pull out the core essence of these comic characters and events to make an extremely satisfying and entertaining motion picture,” said Platinum Studios’ Rosenberg.

Gale Anne Hurd and Valhalla Motion Pictures most recently produced the highly anticipated The Incredible Hulk for Marvel Studios (NYSE: MVL) which is being released by Universal Pictures (NYSE: GE) on June 13. Valhalla is continually developing a broad range of projects and recently wrapped Marvel’s Punisher: War Zone for Lionsgate (NYSE: LGF) and Sony Pictures Entertainment (NYSE: SNE). Hurd has produced more than two dozen feature films that have generated billions of dollars of revenue. Her other credits include The Terminator, Aliens, Armageddon, Aeon Flux, The Punisher, Terminator 2: Judgment Day and Terminator 3: Rise of The Machines among others.

Platinum Studios is an entertainment company that controls an international library of comic book characters from all over the world, which it adapts, produces and licenses for all forms of media including print, film, online, mobile / wireless, gaming, and merchandising. Platinum Studios’ library contains more than 5,600 characters spanning a full range of genres and styles, and also includes properties such as www.DrunkDuck.com, the industry’s preeminent webcomics community. Working with leading companies in the entertainment and new media sectors, Platinum believes it is well positioned to emerge as one of the front-runners in the creation of new content across all media platforms. Platinum Studios – Comics Fueling Media EVERYWHERE!

To learn more about the project, visit www.platinumstudios.com/news.