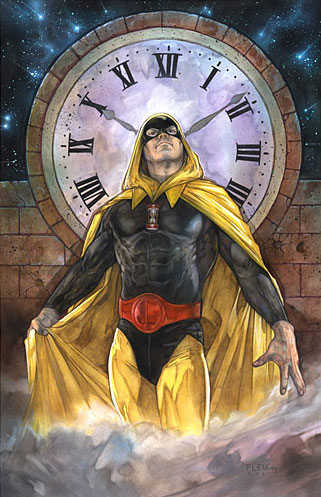 Variety reports that the CW Network is developing a drama based on DC Comics’ Hourman, coming from Lin Pictures in association with Warner Bros. TV.

DC Comics’ Hourman centers on a brilliant but troubled pharmaceutical analyst who discovers the visions that have plagued him since childhood are actually glimpses of tragic events occurring one hour in the future. Determined to win back his ex-wife and son, he heroically prevents these tragic visions from unfolding, finding both purpose and redemption along the way.

Ironside writer Michael Caleo will pen the initial script for Hourman and will executive produce, along with Dan Lin and Jennifer Gwartz.

Hourman is one of the oldest characters from DC Comics, dating back to the 1940s, when The Justice Society debuted in the pages of All-Star Comics. Scientist Rex Tyler developed a pill called Miraclo that gave him super abilities and extra strength, but only for 60 minutes.

According to the report, The CW Network has been a launching ground for DC Comic-based projects – in addition to Arrow and Smallville, the network attempted to develop shows for Robin and his family The Flying Graysons, and created a failed pilot for Aquaman. The CW is also developing Flash, which will be seeded into Arrow.