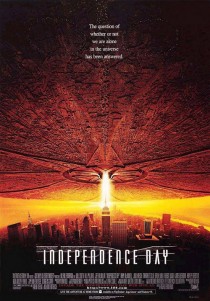 Deadline reports that David Ellison’s Skydance Productions has nabbed the rights to an untitled global disaster film spec script written by Dean Devlin and Paul Guyot, which Devlin will make his feature directing debut. Skydance’s Ellison and Dana Goldberg will produce the sure-to-be-big-budget-tentpole, with Devlin and his Electric Entertainment.

The new project marks a return to the global destruction genre for Dean Devlin. He and Roland Emmerich sold their Independence Day spec script for millions. They continued developed Godzilla, and Emmerich continued destroying the planet with The Day After Tomorrow and 2012. According to the report, Emmerich and Devlin are also working on two Independence Day sequels. Devlin is also currently executive producer of the TNT series Leverage, which may wrap its run at the end of this season, depending on the ratings.

No word on how this new film will destroy the world.

Skydance recently released the Tom Cruise film Jack Reacher, with that film’s director, Christopher McQuarrie, working with Cruise and JJ Abrams on the next installment of Mission: Impossible for Skydance and Paramount. Skydance and Paramount have a huge 2013 in store, with G.I. Joe 2: Retaliation, Star Trek Into Darkness, World War Z and Jack Ryan also slotted for release this year.