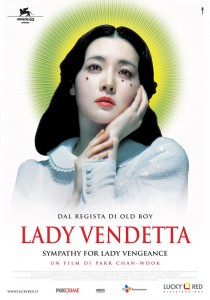 Variety reports that Charlize Theron is set to star in and co-produce a remake of the cult classic Asian revenge thriller Sympathy for Lady Vengeance.

Charlize Theron will star in and produce ‘Vengeance’, the third film in Park’s acclaimed revenge trilogy.

Sympathy for Lady Vengeance follows a woman who, for reasons of her own, completes a prison term for a murder she did not commit, re-emerging to punish the killer and avenge the dead.

“This will be very American – and very unexpected,” says Monahan, who recently penned the screenplay for Robert Rodriguez’s upcoming Sin City: A Dame to Kill For. “Park is a genius; it’s the Everest of adaptations, and I’ve got blood in my teeth to do it.”

Monahan also wrote Paramount’s remake of The Gambler and is about to direct the thriller Mojave. His production company, Henceforth Pictures, has a number of feature and television projects in development, including a screen adaptation of his first novel, Light House: A Trifle and The Throwaways, based on a New Yorker piece by journalist Sarah Stillman.