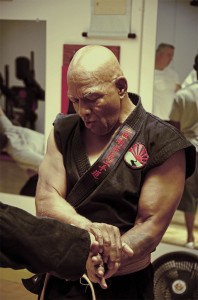 Grand Master Ron Van Clief returns to the New York area this week for a series of film screenings, book signings, self-defense seminars – and memories. Memories that come not only from more than 40 years of training in the martial arts. Those memories also come from his years as a Brooklyn teen invading Chinatown to witness the first wave of kung fu movies in America during the late 1960’s. They come from years as a New York City Transit Police Officer. They come from years as a member of the Negro Ensemble Company, at the time when Richard Roundtree played heavyweight boxing champ Jack Johnson on stage. And finally, they come from years as a groundbreaking action film actor.

However, many people remember Ron Van Clief from his 1994 fight in the Ultimate Fighting Championship IV, at the record-breaking age of 51, where he went up against undefeated 28 year old champion Royce Gracie. Cult cinema fans like me remember films such as 1985’s The Last Dragon, which he choreographed, and The Black Dragon’s Revenge, a 1975 kung fu film he co-starred in with Charles Bonet.

It’s a new world in martial arts and movies since Ron Van Clief competed. But some new memories could happen for fans, as the legendary fighter and actor starts his tour of New York City on Sunday, June 24th, with a free screening of a documentary on his life at the Adam Clayton Powell, Jr. State Office Building in Harlem, beginning at 12 noon.

I shot the photos included with this story for my photo essay that goes with Blvd. Warriors.

I originally posted this story on CNN.com.