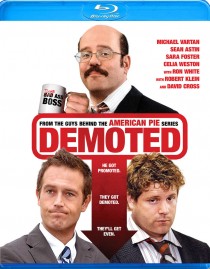 Tomorrow Anchor Bay Entertainment will release the comedy Demoted – described as a mix of 9 TO 5, Office Space and Horrible Bosses – on DVD and Blu-ray disc. To celebrate the release of the hilarious comedy, FilmFetish is giving away 2 copies of the Blu-ray edition to readers.

In order to be entered into the random Demoted Blu-ray drawing:

I’ll be running the Demoted contest through Friday, July 6, 2012.

For Mike (Astin) and Rodney (Vartan), life is good at the Treadline Tire Company. As topline salesmen, they strut through the cubicles, taunt smarmy underling Ken “Don’t Call Me Kenny!” Castro (Cross), hold court at their exclusive lunch room table, and cavort at strip clubs with their boss Bob Farrell (Klein). But when Farrell’s unexpected “departure” puts Castro in charge, the guys find themselves demoted and demoralized.

Now the target of harassment from the higher ups, Mike and Rodney – with the help of their fellow secretaries – will not only come to appreciate how everyone contributes to the success of a small business, but just might find a way to knock ol’ Kenny down a peg or two in the process, proving revenge is best served cold….just like office coffee.

Check out images and the packaging art for Demoted, below. 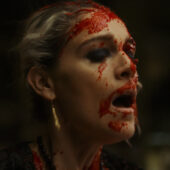