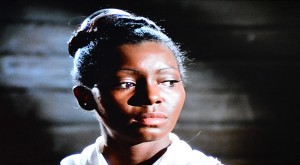 I was doing some research last week on actress Judy Pace, whom I’d read had broken Hollywood color lines by becoming the first black villainess on television with her role as Vickie Fletcher on the TV show Peyton Place in 1968. Pace was a trailblazing actress, securing roles in groundbreaking films, such as 1970’s Cotton Comes to Harlem, one of the first “Blaxploitation” films, as well as the cult classic The Thomas Crown Affair (1968), Billy Wilder’s The Fortune Cookie (1966), and many others. The Daily Variety, along with many publications and critics, called Judy Pace one of the most beautiful woman to ever appear on screen.

While looking over her television appearances, which included semi-regular and guest roles on Ironside, That’s My Mama, Good Times, What’s Happening, Beyond Westworld, Sanford and Son, The New Odd Couple, and Medical Center, I noticed that she’d appeared in Season 2, Episode 16 of Kung Fu, which originally aired on February 7, 1974.

For the few of your who don’t know, Kung Fu starred David Carradine as Kwai Chang Caine (with the young, bald Caine in flashbacks played by Radames Pera), who’s schooled in the spirit-mind-body ways of the Shaolin priesthood. His teacher was the blind, avuncular Master Po (Keye Luke) and the stern but loving Master Kan (Philip Ahn). Caine wandered the West looking for his brother, encountering all types of villainy in each episode of the show.

Judy Pace starred in this episode, titled In Uncertain Bondage, along with: Roger E. Mosley, who went on the become famous for his role as TC in Magnum P.I.; Lynda Day George, who played Lisa Casey on the original Mission Impossible; and Western movie regular Warren Vanders.

The episode featured Lynda Day George as Dora Burnham, a landowner’s ill daughter, who’s being transported to a prestigious care center by Clifford Tait (Vanders) and Seth (Mosley). But things don’t go as planned, and the two men kidnap Burnham. When Caine steps in to rescue her, they decide to take him as well, after seeing his Eastern healing powers first-hand. They figure he’ll keep her alive long enough to the get a ransom from her father. Pace played Jenny, Seth’s companion and possibly lover, who is torn between her dedication to both Seth and Burnham, who family she’s been employed by for many years. Jenny at first reluctantly goes along with the kidnap plan, but later has a change of heart.

Kung Fu ran for 3 seasons, from 1972 to 1975. Though many people today talk about the fact that the legendary Bruce Lee didn’t get the lead role in the show that he helped create, due to racism of the time, Kung Fu still managed to capture the imaginations of young, inner-city youth, who were just beginning to explore martial arts through movies of the era. Reruns of the show continued on for years, leading up to Channel 5’s Drive-In Movie and Black Belt Theater, which showed chopped up, pan-and-scan versions of Shaw Brothers films, along with Taiwanese B-movies. Kung Fu also helped usher in new era of U.S. action films, where fight scenes went from Western-style boxing, to Eastern martial arts-influenced grappling, throws and kicks.

While Judy Pace didn’t do any martial arts in the show, it was a pleasure to see this beautiful woman at work.

Watch the classic introduction for Kung Fu below, along with screenshots from Judy Pace’s episode In Uncertain Bondage.

You can also watch many Season 1 episodes of the television series Kung Fu on its YouTube Channel HERE.