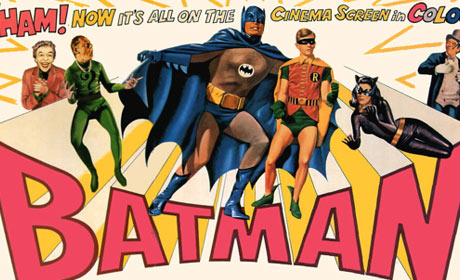 This Saturday, November 12th, the Loew’s Jersey will have a special screening of the 1966 Batman movie, presented by NJ Comic Expo as part of their Holy Batvention weekend in Teaneck, New Jersey.

The live event begins at 7 PM, but fans can also purchase tickets to only see the film at 8:00 PM as well.

The 7 PM event includes time with Catwoman Lee Meriwether, including a short video presentation and time to speak with her and other stars who may stop by from the Batvention convention. The Batman screening starts at 8:00 PM and will include music from the Wonder Organ as people are let in.

Also, next Friday and Saturday, November 18th and 19th, the Loew’s Jersey will be commemorating the 70th anniversary of the Pearl Harbor attack with three film classics set during World War II, including:

The Train (1964)
Directed by John Frankenheimer and starring Burt Lancaster and Paul Scofield.

The Bridge on the River Kwai (1957)
Directed by David Lean and starring Alec Guinness, William Holden and Sessue Hayakawa.

The Loew’s Jersey Theatre is located at 54 Journal Square, in Jersey City, New Jersey. Find out more about these events at loewsjersey.org.