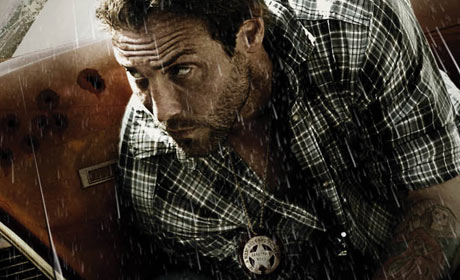 Remember those hardcore, old school, action movies, when it was all about blowing shit up on camera, without CGI? When fights actually looked real? When actual stuntmen did actual stunts? Well apparently Anchor Bay remembers those days fondly with the January 10, 2012 Blu-ray and DVD release of old school action thriller Sinners and Saints.

Location: New Orleans, post-Katrina. As the leader of an elite street crimes task force squad, New Orleans Detective Sean Reilly (Johnny Strong) is trying to cope with the death of his young son and the abandonment of his wife. But when a routine warrant serve results in an ambush and the vicious murder of his partner, this may be the last straw that finally sends Reilly over the edge.

Re-assigned by his mentor Captain Trahan (Tom Berenger), Sean and Det. Will Ganz (Kevin Phillips) investigate a baffling gangland homicide. As the clues stack up on the case, Sean and Will realize that Colin (Sean Patrick Flanery), one of Sean’s childhood friends, and a security contractor just back from the Middle East, seems to be at the center of their horrible case. The two quickly realize there is something far more sinister going on than either could have ever imagined.

Check out the gallery below for box art and screenshots from Sinners and Saints.