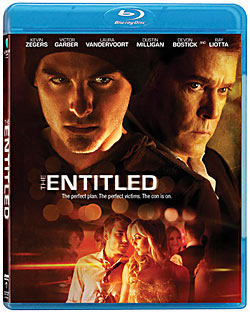 Like so many, Paul Dynan (Kevin Zegers, Frozen, Gossip Girl) has become a casualty of today’s economic realities. Facing mounting debts, medical bills for his mother and foreclosure on their home, Paul can only wonder how some of his peers, born into wealth and privilege, don’t realize how good they have it. Until Paul decides that maybe there’s a way they can make him some money. And maybe teach them a lesson or two about how their lives can be taken away at any moment…

Without the security of the job he wants or the future he dreamed of, Paul Dynan (Zegers), plans the perfect crime to help his struggling family – extort a fortune from three wealthy men (Liotta, Garber, and McHattie). The plan is to abduct their socialite children (Vandervoort, Milligan, and John Bregar) and collect a healthy ransom of $3-million dollars. Over the course of one long night, Paul and his accomplices Dean and Jenna (Bostick and Tatiana Maslany, Heartland, Diary of the Dead) hold the rich kids hostage awaiting the ransom with little idea of the secrets that will surface between the fathers when they are forced to choose between their children and their money. Once blood is shed and things go horribly wrong, Paul must fight to stay one step ahead of his own twisted game.

Bonus features on The Entitled Blu-ray include filmmakers’ commentary, a behind-the-scenes featurette, an alternate ending and the theatrical trailer.

The Entitled is directed by Aaron Woodley and produced by Dave Valleau (Push, The Imaginarium of Doctor Parnassus) with screenplay by William Morrissey (Shattered aka Butterfly on a Wheel). William Morrissey, Deborah Balderstone, Bryan Gliserman, John Pantages, Lindsay MacAdam and Rob Merilees executive produced the film.

Below is a still image slideshow, the trailer, and clips from The Entitled.

The Entitled – Bonus Clip: “Getting On Board”