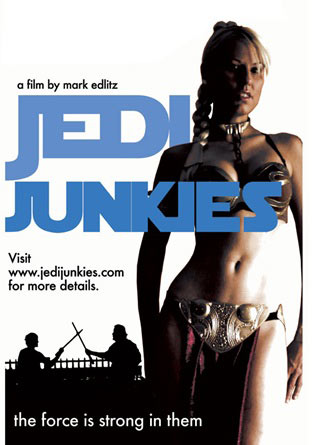 Jedi Junkies centers on a group of Star Wars fans that take their obsession with the storied franchise to places no one should probably go. This group of stalwart fanboys includes one married collector who’s purchased so many Star Wars toys that he and his wife have to sleep on an air matress because the bedroom in their tiny apartment is filled to the rim with toys. Then there’s the guy who purchased a giant Millenium Falcon Toys ‘R’ Us display. But that was nothing compared to the small crew that built a life-sized Falcon for a fan film shoot, only to have it destroyed days later from a combination of wind, rain and poorly thought out craftsmanship.

Jedi Junkies is the quintessential “Hoarders” episode, only much funnier, and ultimately, more touching. You don’t feel sorry for this crew of fanatics, you simply stare in awe at the level of dedication, creativity and ingenuity it takes to amass and store such massive amounts of plastic and metal, with little hope (or concern) of making any real money in return.

Needless to say, Jedi Junkies is certainly worth a look. Everyone will find a piece of themselves in these maniacal extremists and those who love them.

Mark Edlitz, the director and producer of Jedi Junkies, was nice enough to talk to us about completing an indie film, getting people to participate, and how to keep track of your collectibles.

What is Jedi Junkies?
Jedi Junkies is a film about extreme Star Wars fans. It’s also a funny and affectionate look at fandom.

Who are some of the Jedi Junkies you profile in the film?
The fans we interviewed are a passionate and eclectic group. We interviewed Flynn who runs a light saber academy called the New York Jedi. We spoke with Candy Keane, a CosPlay model, who has made a name for herself by dressing up as Slave Leia. We also profiled AeroSith — a Star Wars themed band.

How did the idea for Jedi Junkies take shape?
I knew I wanted to make a film that didn’t require someone else’s “permission” before I could start. Also, I made another feature film before called The Eden Myth. That was a narrative and starred Justin Kirk (from “Weeds”). I also wanted to pick a topic that would sustain my interest over those long years that it would take to shoot and edit a film. In our case, it was 4 years of work. But really enjoyable work.

You mentioned the project took 4 years to complete. What were some of the obstacles you faced as an independent filmmaker, while working on Jedi Junkies?
Making a movie is really nothing but dealing with obstacles. There are challenges every day. Everything from finding the right people to interview, to getting a good editor (we found a great one named Stephen Walker), to discovering the right music. Then once the film is made the next challenge becomes trying to get people to watch it! It helps to make it through these challenges with the help of a friend. In my case, Jerry Kolber, who produced with me, is also my best friend. Having a partner in crime help.

How did you find the interviewees for the project?
Once we really got into production, fans would introduce us to other fans. “You have to meet my friend. He has so many Star Wars toys that, to make room for them, he threw out his bed. Now he sleeps on his floor.”

But at first, we found our subjects through the social media sites like MySpace and Facebook. Of course, now we have our own Facebook page. There fans can talk to us about the film, their Star Wars insights and sign up for giveaways.

How did you get Olivia Munn, Ray Park and Peter Mayhew to participate? Did you have to go through agents, direct connection at a Con, or something else?
I met Olivia through my day job. She did us a huge favor. She’s very funny in the film. I met Ray Park and Peter Mayhew at different conventions. I was thrilled when they agreed to talk with us. We gave Ray Park a plastic light saber and he showed us some of his impressive light saber skills.

What was the approximate budget of Jedi Junkies?
We didn’t really have a budget. We just paid for expenses as they came up. But after a while, the expenses do really add up. Especially post production. We were very lucky that Mark Grande, our executive producer, brought in Jason Gamba, our co-producer, to help get us to finish line.

How the hell did you find Chad Vader (those shorts are fuckin’ hilarious)?
The Chad Vader guys are very, very funny. Just as funny as the films they make. And lets not forget about Ed Sanchez, the director of The Blair Witch Project. He invited us into his home and gave us a tour of his very impressive Star Wars toy collection. As you see in the film, he takes his toys out of the box and displays them in very creative ways.

How many Star Wars collectibles do you own personally (be honest)?
I have more action figures than an adult should. For a while I had a bit of a problem. I tried to collect all of them. However, since then, I’ve given up. I couldn’t keep up!

How are you promoting the film?
We are having a light saber giveaway! To enter, just go to our Facebook Page HERE and hit “like.”

How can people get the DVD?
Jedi Junkies is now available on DVD and sold exclusively via Amazon. You can purchase it RIGHT HERE.