Magnet Releasing, the genre arm of Magnolia Pictures, has acquired U.S. release rights to Panna Rittikrai’s BKO: Bangkok Knockout from Sahamongkol. Panna Rittkrai is a legend in Thai action cinema. The director of Born to Fight and fight coordinator for such classics as Ong Bak and Chocolate, he was the star of many action films in the 70s and 80s, and is famously a mentor to some of the top action superstars working today, including Tony Jaa (Ong Bak), Dan Chupong (Dynamite Warrior) and Jija Yanin (Chocolate).

BKO features a range of martial art disciplines, and centers on a group of fight club pals whose styles vary from Muay Thai and Capoeira to Kung Fu and Tai Chi, who must fight for their lives when one of their friends is kidnapped.

“BKO is a bigger, badder, crazier Born To Fight, and further proof that Panna and Sahamongkol do death-defying action better than anyone,” said Magnet’s Tom Quinn.

“BKO is a pet project of our action choreographer, Panna Rittikrai and Magnet is the perfect partner to be working with in getting the movie released in the US,” said Sahamongkol’s Gilbert Lim. “We are very excited to be working together again on this action-adventure with amazing crazy stunts.”

Magnet is planning to release BKO in 2011.

Sahamongkol posted a kinetic trailer for BKO: Bangkok Knockout online, and it proves this film is a serious action movie. It also proves that Thai martial artists can fight – even if their underneath moving tractor trailers. And finally, that they love to kick ass with their knee caps. 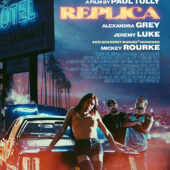